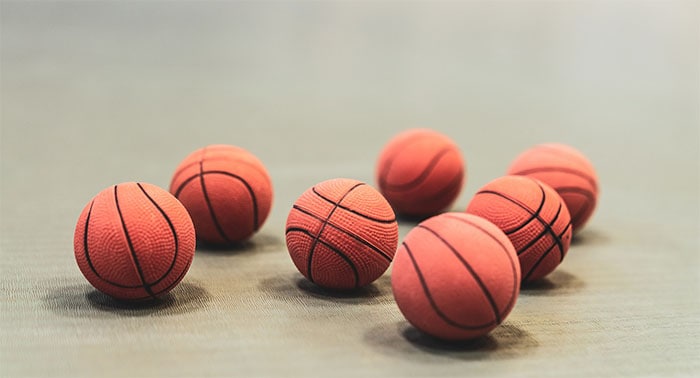 In this article we’ll review and compare two of the most popular makers of electronic basketball arcade games – Pop A Shot vs Lifetime.

Both brands are well worth a look if you want to bring all the fun of the arcade back into your home – for the young basketball fan in your family or for yourself!

We’ll cover their range of products, compare features of their most popular games, review their warranties and check out the company histories.

Pop A Shot created the first electronic basketball games for arcades way back in 1981 so they know a thing or two about building them!

They now specialize only in basketball games for the home market (they no longer make the coin-op games for arcades). Their current range includes:

Sport Series: The Dual Shot Sport (2 players) is a budget version of the Home Dual Shot above. It is built down to a very competitive price with fewer balls and other cost savings. See our detailed guide for a full comparison of the Pop A Shot Home Dual Shot vs Sport models.

Premium Series: a range of indoor basketball games for 1 or 2 players, based on the Home series above but with extra features and a price tag to match… The price makes them more suitable for very serious players.

Each Pop A Shot game in the Premium series can be fully customized, as they are handmade and unique. You can customize the backboard, front panel and side panels, add your name or logo by providing them with your artwork.

Lifetime are a Utah company founded in 1986 to manufacture outdoor basketball systems. They still do – they won the ‘Best Value’ award in our review of outdoor portable basketball hoops recently.

But, unlike Pop-A-Shot, Lifetime Products have expanded to also sell an extensive range of different products in many other markets, not just basketball games. Their current range includes:

Electronic Basketball Games: only one model – the Lifetime 90648 Double Shot Deluxe (2 players). It has very similar features to Pop A Shot’s Home Dual Shot but is often priced lower. See our Game Comparison below to check out the features of each model.

Portable Basketball Hoops: Lifetime still produce an excellent range of outdoor hoops for every age and budget – check out our guide to portable hoops above.

Lifetime also has a retail chain of 5 stores in Utah called Lifetime Stores (formerly Backyard Inc). These are factory outlets through which you can purchase new or seconds and / or blemished products.

Lifetime only produce one electronic basketball game (the 90648 Double Shot Deluxe). So we will compare that to its closest equivalent – the best Pop A Shot basketball game (Home Dual Shot).

All Pop-A-Shot electronic basketball products carry a 90 day warranty against defective workmanship and / or materials when used for the intended purpose under normal conditions. It is not transferable should you sell or give your product to someone else.

The Lifetime double shot arcade basketball system also offers a 90 day warranty against defective workmanship and / or materials when used for the intended purpose under normal conditions within the U.S.A. and Canada.

The company was created in 1981 by a college basketball coach called Ken Cochran. He was bored when recuperating from heart bypass surgery, until he was inspired by a game of mini basketball on his desk.

He commissioned local businesses to make various parts and invented the “Triple Shot” – 3 basketball rims attached to side-by-side backboard with a volleyball net on a frame that allowed the balls to roll back to the players. With this, his first game – the “Triple Shot” – came into being.

When it proved popular at one of his sports camps he realized the wider potential. As the size made it impractical to transport around, he built a single hoop version – the “Mini Basketball”. This was more easily transported so he could install it in a local bar where players were charged $1 per minute of playing.

As electronic games started to grow in popularity, he upgraded the design to include an electronic scoring system and a 40 second clock. Further improvements were a solid return ramp and a holding area for returned balls.

Cochran retired in 2016 with new management taking his place. New Pop-A-Shot products that incorporate more technology are in the pipeline.

In 1972, in his garage in Riverdale, Utah, Barry Mower redesigned his backyard basketball pole to make it stronger for his family. It worked so well that he placed ads in his local classifieds and started to sell it.

As business grew, he opened a sports store and eventually he formed the Lifetime Products company in 1986. He chose the name to reflect the durability of his products.

Initial products were based around basketball games. Lifetime introduced and patented the first “quick adjust” basketball pole on the market and adjustable poles later became standard throughout the world. In 1992, they introduced the first complete basketball system packaged in one box.

From 1995 onwards, Lifetime expanded into many other areas besides basketball games as they had expertise in both plastic and metals. They also started to produce processed steel items for other manufacturers in the region.

Lifetime has a history of innovation and continue to bring out new products such as swing sets and other playground equipment.

Pop A Shot have remained remarkably true to their roots. Although they have developed their range and moved into clothing, their core products are still electronic basketball games. But they have kept innovating, for example with a model for outdoor use.

So which of these two games is the best?

We love that the 90648 Double Shot Deluxe (uniquely) lets you change the height of the front lower bar, as well as the height of the backboard. This feature really helps kids of different ages, or adults, reach down and pick up balls more easily, at a height that best suits them. Lifetime arcade games have solid build quality and are usually priced cheaper too.

On the other hand, it is less portable (no wheels) and significantly heavier than the Home Dual Shot. It also comes with 1 less ball, has fewer game modes and there’s no outdoor version.

We think it’s too close to call to pick an outright winner – it depends which of the above features are most important to you. But they’re both premium and popular games so either can be a great choice.

Pop A Shot vs Lifetime Comparison was last modified: January 16th, 2023 by Roy