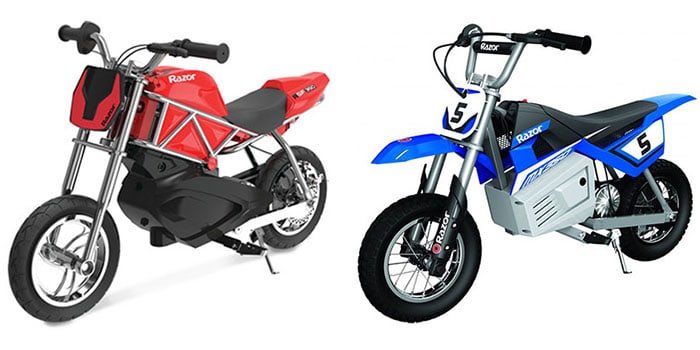 In this article, we compare the Razor RSF350 vs MX350 electric bikes. These popular models share many of the same features but one is designed as a street bike whereas the other is a dirt bike for off-road fun.

Let’s see how they match up! First we have a quick comparison table of the main features of the Razor RSF350 vs MX350. Then we look at the main differences between them and the advantages of each bike, in turn.

Finally, we’ll summarize the pros and cons of both rides, to help you make the right choice for your kids, and for you.

These bikes were our top picks for Best Street Bike (RSF350) and Best Budget Choice (MX350) when we reviewed the best electric dirt bikes for kids recently.

In the table below we’ve summarized the main features of each bike in a side by side comparison and highlighted differences in bold, to make it easy to see where the specifications vary.

* Note on Age: Razor’s recommended age for both the RSF350 and the MX350 is a highly conservative 13+ but an age range of 5-10 (real world guide from many buyers) with parental supervision may be more suitable. Because both these bikes are very small – the seat height is only about 20″ which is at least 14″ lower than a regular, adult sized dirt bike.

Check out the videos in the next section for a real world view of the appropriate ages for these bikes. The first video shows 4 and 7 year old boys riding the MX350 (which is basically the same size as the RSF350) – teens just aren’t going to fit…

The biggest difference between both models is the style of bike and the type of terrain that each was designed for.

The RSF350 is a street bike with standard tires on 10″ wheels whereas the MX350 is a dirt bike with knobby tires on 12″ wheels which make it more suitable for riding off-road.

The RSF350 is also 18% lighter (51 lbs vs 62 lbs) so is easier to lift up and it has variable speed for smooth power delivery whereas the MX350 is single speed (on or off) which can make the start quite jerky.

However the MX350 does come in a wider selection of colors (blue, red or black) whereas the RSF350 is only available in red.

Check out the video below for a real world view of the Razor MX350 with 7 and 4 year old boys riding:

For comparison, the video below shows the Razor RSF350 Electric Street Bike in action:

Both these bikes have very similar specifications so there aren’t too many advantages compared to the MX350:

Likewise, the MX350 doesn’t have many advantages over the RSF350:

Both these electric bikes can be a good choice for young kids aged about 5-10 years old. They are almost the same size and have very similar specifications which makes it tough to pick a winner between them.

So which model is best? We think the best choice depends on the type of terrain that the bike will be used on most often. For mainly off-road riding the MX350 is the better bike, thanks to its off-road knobby tires and larger wheels.

Whereas the RSF350, with its street tires and variable speed, is the best choice for riding on hard flat surfaces like concrete or dry grass/dirt. While it is capable of venturing off-road occasionally it won’t have as much traction as the MX350.

NOTE: A parent’s decision to allow their child to ride either the Razor RSF350 or the Razor MX350 should depend on the child’s individual maturity, skill and ability to follow rules.