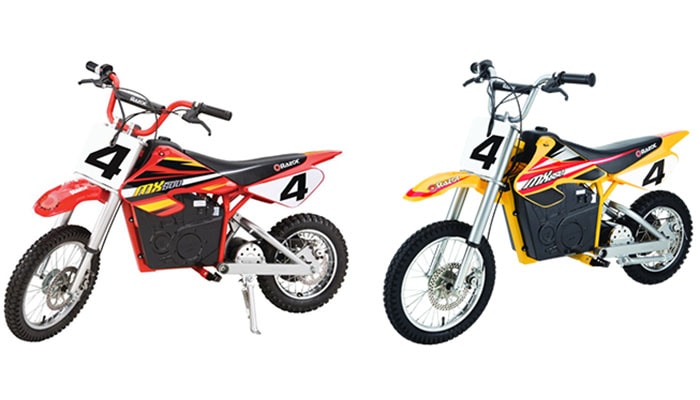 In this article, we compare the Razor MX500 vs MX650 electric dirt bikes.

Both can be a great choice if you want to treat the thrill seeker in your family to a well specified electric dirt bike for off-road fun. But, although they share most of the same components, there are several important differences between both models.

Our guide below will show you which is the most suitable for your children, or for you! First we’ve got a quick comparison table of the key features of the Razor MX500 vs MX650.

Then we look at the main differences between them and the advantages of each dirt bike, in turn. Finally, we’ll summarize the pros and cons of both rides, to help you make the right choice.

Both these bikes were our top picks for Overall Best Value (MX500) and Ultimate Choice (MX650) when we reviewed the best electric dirt bikes for kids and teens in 2023. Let’s take a closer look at how they compare against each other.

In the table below we’ve summarized the main features of each bike in a side by side comparison and highlighted the differences in bold.

* Note on Age: Razor’s recommended age for the MX500 is 14+ but this is highly conservative. An age range of 8-14 (real world guide from many buyers) with parental supervision may be more suitable because the Razor MX500 seat height of 24″ is at least 10″ lower than a typical adult dirt bike.

Similarly, Razor’s recommended age for the MX650 is 16+ which is also very conservative. An age range of 10-16 (real world guide from many buyers) with parental supervision may be more suitable. Because it isn’t a full adult size – the Razor MX650 seat height is 24″, compared to 34″ or more on a regular adult dirt bike.

See the videos in the next section below for a real world view of the appropriate ages for these bikes.

Check out the video below for a real world view of the Razor MX650 powerhouse in action:

For comparison, the video below shows the less powerful Razor MX500 with a 9 year old boy riding (remember that both these bikes are exactly the same size)

The summary below highlights what we love about both models:

The summary below includes factors that we don’t like so much about both models. But note that most of these issues are common to all electric dirt bikes in this price range:

The Razor MX500 and MX650 are almost identical dirt bikes – they’re the same size with all the same features except the MX650 has a more powerful motor.

So which model is best? Well, the Razor MX650 top speed is 17 mph and it can cope with riders weighing up to 220 lbs which makes it more suitable for older or heavier teens – and maybe some adults too!

Whereas the MX500 is probably the better and safer choice for pre-teens, unless they are mature and experienced enough to be let loose on the hardcore MX650.

As the Razor MX500 and MX650 dirt bike are mechanically identical, apart from the motor, they share the same manual.

The owner’s manual for both these Razor dirt bikes is available in PDF format here.

NOTE: A parent’s decision to allow their child to ride either the Razor MX500 or the Razor dirt bike MX650 should depend on the child’s individual maturity, skill and ability to follow rules.