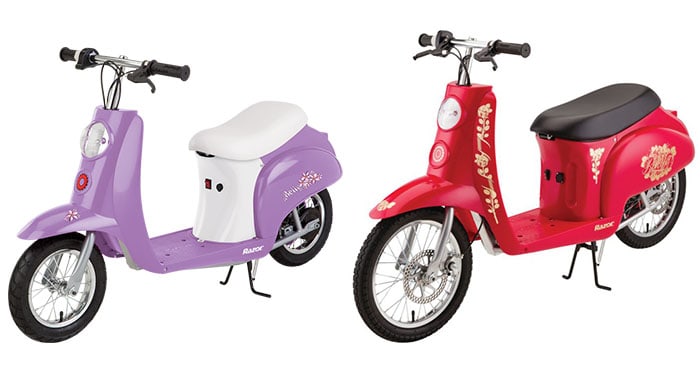 In this article, we compare the Razor Pocket Mod vs Pocket Mod Bellezza electric scooters. With their floral artwork, both models are primarily aimed at girls. But they are suitable for boys too.

The Pocket Mod comes in a range of colors – a black ‘Vapor’ version for boys and some pretty options like hot pink and dusky purple for girls, while the Pocket Mod Bellezza is red which is quite gender neutral.

Both Pocket Mod versions share the same stylish Euro-style scooter design and (based on Razor’s recommended minimum age) they target quite similar age groups. So let’s take a look at how they match up!

First we have a quick comparison table of the main features of the Razor Pocket Mod vs Pocket Mod Bellezza. Then we look at the main differences between them and the advantages of each scooter, in turn.

Finally, we’ll summarize the pros and cons of both rides, to help you make the right choice for your kids, and for you.

The Pocket Mod was our top choice for best Electric Scooter for girls (or boys, depending on the color) when we reviewed the best electric dirt bikes for kids and teens recently.

In the table below we’ve summarized the main features of each scooter in a side by side comparison, so you can easily see the differences between them.

* Note on Ages: Razor’s recommended age for the Pocket Mod is a very conservative 13+ but an age range of 7-13 (real world guide from many buyers) with parental supervision may be more suitable. Because it is quite small – the seat height is at least foot lower than a regular, adult size scooter.

Similarly, Razor’s recommended age for the Pocket Mod Bellezza is 14+ which is also conservative. An age range of 10+ (real world guide from many buyers) with parental supervision may be more suitable. It is larger than the regular Pocket Mod and has more power, making it suitable for older kids, but it is still small enough for some pre-teens.

Check out the videos in the next section for real world views of appropriate ages for these scooters.

The biggest differences between both versions of the Pocket Mod are the size, power, run time and the size/age of rider that each is suitable for.

A more powerful motor (500W vs 350W) and extra battery (36V vs 24V) give the Pocket Mod Bellezza a 75% longer run time (70 minutes vs 40 minutes) per battery charge. It also has the added benefit of variable speed whereas the Pocket Mod only has single speed.

Check out the video below for a look at the Razor Pocket Mod electric scooter with a young girl riding:

For comparison, below is the larger Razor Pocket Mod Bellezza in action:

The smaller Pocket Mod enjoys many advantages compared to its larger sister:

The Razor Pocket Mod Bellezza is the deluxe version of the regular Pocket Mod. Being the larger scooter gives it several advantages over the Pocket Mod:

Pros of Both Scooters

Cons of Both Scooters

Here is a summary of what we don’t like so much about both models. But most of these issues are common to all electric scooters in this price range:

Both these Razor Pocket Mod scooters are an awesome choice for girls, who may prefer the stylish Euro design over the more common electric dirt bikes. However the Pocket Mod Vapor, in particular, is certainly aimed at boys too.

So which model is best? We think the Razor Pocket Mod Bellezza is the better choice for kids over the age of 10, if they are large and mature enough to handle the extra weight and power.

The bigger frame and 220 lbs weight limit mean that it should last fast growing kids many years longer, right through to adulthood in some cases. And the substantially longer battery life will let them have more fun using it.

However, if your child is younger than 10, or new to electric scooters, the smaller frame and lighter weight of the Razor Pocket Mod make it a safer option (provided your child doesn’t exceed the weight limit). It is also a good choice if on a tight budget – it is substantially cheaper than the Pocket Mod Bellezza.