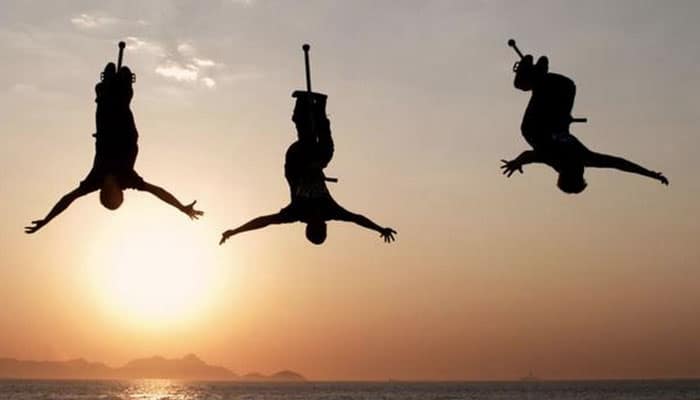 The origins of the pogo stick (and its name) are somewhat mysterious and there are many conflicting reports. One even claims that it was invented by a blacksmith in the Transylvanian village of Pogo in the 1700’s! But very early forms of the stick were simple wooden stilts.

There wasn’t a single inventor of the pogo stick as we know it today. The three essential design features of a modern pogo stick were described in 3 separate patents over a period of about 30 years by George Herrington, Max Pohlig & Ernst Gottschall, Walter Lines.

In 1891, George Herrington of Wichita, Kansas patented a pair of “spring stilts” that had compression springs under each footrest.

The patent claimed they could “be used at the will of the operator for leaping great distances and heights”.

Pulling the cord at the top of each stilt released the spring, catapulting the wearer into the air. Perhaps for obvious reasons, they weren’t very successful…

In 1920, two Germans Max Pohlig and Ernst Gottschall filed a patent for an improved “spring action hopping stilt”. This was a single pole with a footrest on each side which was considered to be much easier to use than a pair of stilts.

In 1921, Walter Lines filed a patent for a “jumping stick” which had a handle at the top of the stick. However, an issue with the single handle was that it could strike the user in the mouth when the stick bounced back up…

So when was the pogo stick invented? All we can say with certainty is that it was invented between 1891 and 1921, in a series of patented designs that built upon each other to finish with a design which is recognizable today.

Despite all the facts and patents listed in the pogo stick history above, some people still wrongly credit Illinois baby furniture and toy designer George Hansburg as being the inventor of the pogo stick. They claim that he patented it in 1919.

But in reality what he patented then was a toy car with a rubber band powered propeller motor. He received patents for several different designs of toys (including a child’s vehicle with sidecar in 1923). But his first patent for anything like a modern pogo stick was in 1957.

The 1957 patent had the unique feature of 2 separate handles as shown below:

This dual handle design became the industry standard and is still used in modern pogo sticks.

However, prior to 1957, Hansburg’s company (SBI Enterprises) was already manufacturing pogo sticks at his factory in Elmhurst, New York.

Back in 1919, the Gimble Brothers Department Store had asked him to design a jumping stick that would be more resilient than the wooden ones they had imported from Germany.

The wooden ones had rotted due to the damp conditions on the long journey to America by ship.

His answer was a painted, all metal stick with an enclosed spring mechanism. So he may have been manufacturing pogo sticks way back in 1919, but he didn’t patent the two handled design then.

It could be argued that Hansburg mastered the modern pogo stick design in 1957. But he definitely didn’t invent the pogo stick way back in 1919…

If you’re looking to buy a pogo stick, check out our article on the best pogo sticks for our top picks, reviews, a buying guide and FAQs.

Like the debate over who invented the pogo stick, there’s no absolute certainty as to how the ‘pogo’ got its name.

The most popular theory is that the name Pogo is derived from the first 2 letters of the surnames of the Germans who applied for the Single Pole patent in 1920 (see point 2 above).

Their surnames were POhlig and GOttschall – using the first 2 letters of each surname was a popular naming convention for companies and products in Germany, instead of using just the initials which is more common in countries like the US and UK.

Another theory is that the Pogo name is a play on the German dialect word “Pogge” which means ‘frog’. [Being pedantic, frogs jump forwards whereas pogo sticks just bounce up and down, but it’s a theory…]

A final theory was perpetuated by George Hansburg (who claimed to be the inventor of the pogo stick – see above). He said that he got the idea for the name Pogo from a Burmese man who fashioned a jumping stick for his daughter, called Pogo, so that she could get between temples without walking through the mud!

Whatever its origins, the name “pogo” was in widespread use by the middle of 1921. It featured in several newspapers of the time, especially in England and France where the ‘Pogo craze’ really took off.

No matter who invented the pogo stick, the name Pogo is not trademarked and many companies now sell their own version of it.